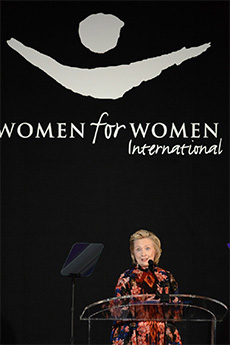 Oh, thank you so much. (Laughter)

Really, it is I who have come to applaud all of you and express gratitude for the work of 20 years that has made such a difference. I want to thank my friend, Sheryl Sandberg, for not only that introduction, but for her leadership and the power of her example. It is important that women and girls see examples that they can aspire to and Sheryl has certainly provided that to so many.

I also just heard that Congresswoman Carolyn Maloney is here tonight, and I wanted to acknowledge and thank Carolyn who has been a great champion. Thank you, Carolyn.

Thanks to Isha for her moving comments earlier. Thanks to all of you, and in particular, I want to thank Afshan and the team here at Women for Women International, Amy Towers, all the members of the board. And I especially want to thank Zainab and Amjad who have been real inspirations to me over the last 20 years.

Being able to participate tonight, I didn't need an award, thank you very much for that. I really needed to know that the next 20 years are going to be just as courageous and groundbreaking as the last 20 years. And I think as we can tell from this audience tonight, and the stories that have already been shared, that is not in doubt. We need to continue the emphasis on supporting women who are on the front lines of violence and conflict, and who deserve to be decision-makers and leaders in peace-making and peace-keeping. So it is humbling to step back and consider all that this organization has done to champion women worldwide - humbling and inspiring. I think of the thousands of women who have endured - still endure - the unimaginable traumas of war, who have found this organization there for them, providing new strength and purpose as they try to knit their lives back together. The women and families who have lost everything to violence and to chaos who, thanks once again to all of you, have been able to rebuild. The communities that once were desolate and now hum with activity - the new schools, the new businesses - thanks to the education and economic opportunities that you provide. By helping women in some of the most dire circumstances that have existed in the past and the present, and I fear to say the future, you are - as the slogan says - not only helping them, you're helping communities and countries. You are unlocking the talent that exists, the potential that lies within women everywhere. You are helping to make our world more secure, more prosperous, more peaceful.

So first and foremost, thank you. Thank you to everyone who has believed in this dream and has been part of making it a reality. Thanks also, to those of you who have ventured out to see what you have helped create. I'm a big believer in getting beyond the confines of the board room or the halls of power to see firsthand what we can do to support the changes that you are advocating. That's how I first came to know about this organization. When I met the founders, both Zainab and Amjad, it was 1995. It was a terrible time of turmoil and suffering in Bosnia. The Clinton administration was deeply engaged in trying to figure out a way to stop the violence, see if there was a path toward peace. It was something that was obsessing my husband and others, including myself. And then we heard about these women doing incredible work to assist other women. Women who were survivors of the horrors of that war. Now, as you might imagine, helping the women of Bosnia wasn't considered a high priority by everyone. But what Women for Women International knew was what we all had to confront. Women and girls were targeted for abuse. They were the ones who carried the traditions, and they were the ones who had to be broken in order to break the will and the spirit. Women’s wellbeing was critical to any kind of resolution, let alone creating a decent future.

Well, Bill and I could not have been more excited and so we invited Zainab and Amjad to meet with us in the Oval Office to hear about their work, and to look into their eyes and to see this sense of deep commitment - and then to support them, to see what could happen. What started as a labor of love with a very small team and one far away region, grow into a global network empowering women everywhere. You knew right from the start what the rest of the world has taken longer to realize. You cannot have real peace and security if you marginalize and exclude women. You cannot have decent, just societies if you abuse women. You cannot move on a path to democracy and open economies if you isolate and marginalize half the population.

For some that was self-evident, others have had their eyes opened over the last 20 years. And I have seen the results. I have seen what Women for Women International has done, working for example with the Clinton Global Initiative to make concrete, measurable commitments to help women survivors of war lift up themselves. To help people all over the world live lives of dignity and purpose. Simple examples, putting mobile technology to work for socially excluded women in developing economies, using cell phones to build support networks and connect women to the information resources and tools they need to be their own agents for their own lives. Or to take another example, launching a public awareness campaign, in places like Afghanistan or Rwanda or Sudan, to mobilize men and boys in support of female empowerment. The goal? To challenge stereotypes, to combat gender based violence, to promote peaceful families and societies.

So the mission of this organization that you are here in this great hall tonight to support, has been close to my heart for a long time. And now it is so clear that we have created a movement of women and men who recognize there should be no ceilings on what women aspire to and achieve. That's what we're going to be doing at the Clinton Foundation in partnership with all of you - going after all those ceilings that still hold women and girls back from achieving their own full potentials. Whether they be political, economic, social, religious, by holding back women they hold back entire communities and countries.

So as we look toward the 20th anniversary of the Fourth World Conference on Women in Beijing in 2015, we need to collect the best data and research available on the progress that has been made in the past two decades. We need to tell the stories that deserve to be told about the heroic women who, with their own grit and grace, have made changes that were once unimaginable. And we need to be sure we take stock of how far we've come, and what we need to do in the next 20 years. Because while we may not have to convince the people in this room of the importance of supporting women, there are still plenty of folks out there who are skeptical, if not downright hostile, to the notion. And the best way to convince them is to make the strongest possible case that supporting women and girls is not just a nice thing to do, but it actually makes a difference. It grows economies, it helps create and sustain peace and security. So making the strongest possible case that women - the women you have been helping - are women who will help us shape that future, is why I am here tonight. To say yes, thank you. To express gratitude to all of you for knowing how important this is, and for continuing to work to ensure that more women can be part of a powerful movement for peace everywhere. That is my hope, that is my goal, and that is why all of you are doing such great things by making sure Women for Women continues to make a difference.

Thank you all very much.

Learn more about how to get involved in Women for Women International events: Click Here