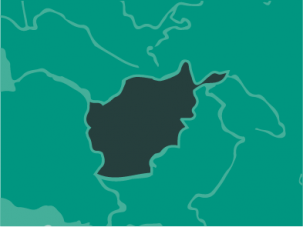 Afghanistan is currently one of the most difficult countries in the world in which to identify as a woman. Political and economic insecurity, educational inequality, sexual violence, and poor health are pervasive amongst Afghan women and children, but when equipped with powerful vocational and economic tools, women can change their lives, regardless of circumstance.

Since 2002, the Stronger Women, Stronger Nations program has reached more than 127,000 women in five provinces in Afghanistan. When Taliban forces took over Kabul in August 2021, we paused our programs for safety reasons and worked to secure the evacuation of more than 66 of our most at-risk staff and their family members to the UK. It was a frightening time for many colleagues in Afghanistan, and we provided psychosocial support for some of our most vulnerable staff and the women we serve.

International sanctions pushed the country’s economy to the brink of collapse. We adapted, procuring kitchen garden and poultry kits to address widespread food insecurity and hunger and creating the potential for the women we serve to earn income in the months ahead. Our colleagues showed remarkable fortitude in difficult circumstances, leading talks with the de facto government and, after months of discussions, persuading them to allow us to restart our programs in early 2022.

Since we resumed our programs in 2022, we are operating in three provinces and have over 3,116 women participating in our SWSN program who are receiving training in 12 training centers.

About Our Afghanistan Program

Women for Women International has developed a program that offers Afghan women a constructive, dignified way to discover their power. Our foundational training helps women know and defend their rights, lead mentally and physically healthy lives, influence decisions at home and in their communities, generate income, and save money for the future, contributing to economic self-sufficiency in their lives and for their families. In a recent randomized control trial, our Stronger Women, Stronger Nations program in Afghanistan showed that there was a significant impact on women’s social and economic well-being a year after graduating from our program. Compared to women who did not participate, women in the program were nearly twice as likely to be earning money and seven times more likely to have savings.

Women in the program also experienced:

An early adopter of our men’s engagement work, our Afghanistan team has reached almost 6,700 men since 2014.

Report: No One Hears Our Voices

In interviews, Afghan women and women’s rights organizations describe their experiences under Afghanistan’s new de facto government and set out their hopes for the future. In their own words, Afghan women in the report call for women’s rights, inclusion in public life, urgent economic relief, and for the international community to step up in solidarity with them.

Report: “Where I Am Going and Where I Am” - The personal and professional opportunities and challenges facing Afghan women human rights defenders outside Afghanistan

In August 2021, many Afghan women’s rights activists (WRAs) and women human rights defenders (WHRDs) fled Afghanistan out of fear for their safety and security under the new regime. Nearly a year later, Women for Women International and the Women’s International League for Peace and Freedom (WILPF) share a report and policy brief outlining key findings and recommendations based on research and outreach to Afghan WRAs/WHRDs that have continued their advocacy for women in Afghanistan – from all over the world. Their insights help us understand how we can support them in overcoming their personal and professional challenges as refugees and asylum seekers, as well as how to take advantage of the opportunities to support their work and leadership of the Afghan women’s rights movement.

My Name is Aaila

I am 39 years old. I am originally from Guhr province and my father was one of the famous and...
Read My Name is Aaila
From
Afghanistan

My name is Nasima

Twelve years ago, my family and I came from Pakistan to Afghanistan. We are 14 people in total, and...
Read My name is Nasima
Take Action With Afghan Women

One year after the fall of Kabul, women in Afghanistan are starving and have lost access to their hard-earned rights, education, and jobs. Urgent action is needed.

Afghanistan One Year On: This is Not the “New Normal”

Women of Afghanistan Need Our Solidarity

As winter continues, the threat of famine is real. Your donation will provide garden kits, cash transfers, and psychological first aid for women in need.