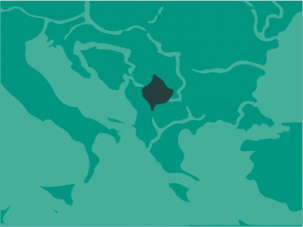 The war in Kosovo ended in 1999, but it remains a patriarchal society where women struggle for economic and social equality. Even before the war, girls were often excluded from education, which has resulted in low literacy rates among women, especially in rural areas. This exclusion further constrains women’s participation in government and other aspects of public life.

In 2017, our Kosovo leadership established Kosova–Women 4 Women, a locally registered, independent civil society organization that continues to work closely with Women for Women International to serve marginalized women. Since its inception, Women for Women International and Kosova–Women 4 Women have reached more than 34,000 women through the Stronger Women, Stronger Nations program.

Currently, in addition to reaching women through the program, Kosova–Women 4 Women, has been focused on fostering a network between women program graduates. This includes networking by sector to enhance market access and supporting job placement while also working with graduate Change Agents who are advocating for women’s rights in their communities.

Learn About Valbona
From
Kosovo

My name is Valbona

For Valbona, the war in Kosovo destroyed everything she and her family had. END_OF_DOCUMENT_TOKEN_TO_BE_REPLACED
Read My name is Valbona
Read More from Kosovo

A Circle of Support

Stitching Together Opportunities for Women

You Can Create a Ripple Effect

Your monthly gift of $35 provides a woman with skills to support her family and creates sustainable change.