At the Summit in London, WfWI-UK organized sessions, hosted an interactive exhibit booth, and used the media attention to increase visibility and build support for action.

For three days, the LCD featured live tweets with the hashtag #TimeToAct from men and women around the globe in the London ExCeL Centre. The digital messages were a constant reminder to 1,700 delegates attending the Global Summit to End Sexual Violence in Conflict earlier this month of the growing outcry and support for prioritizing the issue.

Ending the silence and shifting the culture of shame to one that holds perpetrators accountable was a central message from event co-chairs Angelina Jolie, Special Envoy for the United Nations High Commissioner for Refugees, and UK Foreign Secretary William Hague.

“The time to act is now, and ending the cycle of violence and culture of impunity begins by breaking the silence, listening to the women who have survived, and implementing programs that work,” was the message WfWI-UK Executive Director Brita Fernandez Schmidt  shared in dozens of international radio and television news programs throughout the conference.

At the Summit in London, WfWI-UK organized sessions, hosted an interactive exhibit booth, and used the media attention to increase visibility and build support for action. An important recognition of Women for Women International’s work supporting women survivors of conflict, the Foreign Secretary’s office invited Women for Women International to organize events and interactive sessions.

Raising the Voices of the Women We Serve 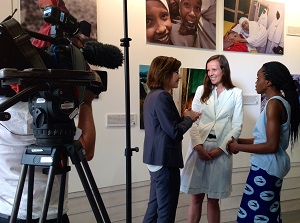 WfWI-UK Executive Director Brita
Fernandez Schmidt shares the
experiencesof women in conflict with
media at an exhibition of photos taken
by Women for Women International
graduates in the DRC.

On June 12th, WfWI-UK Executive Director Brita Fernandez Schmidt moderated the panel, Lessons from Yugoslavia  What can the world learn from experiences in Bosnia-Herzegovina and Kosovo? Country Director Iliriana Gashi highlighted the experiences of women in Kosovo who had survived sexual violence in conflict.  For a research and policy perspective, the discussion included International Center for Research on Women President Dr. Sarah Kambou and Lecturer in Politics and International Relations at Royal Holloway University of London Dr. Lara Nettelfield.

Throughout the summit, WfWI Board Member and policy expert Rima Saleh, along with Policy Director Carron Mann, brought the voices and experiences of the women we serve to other summit discussions and events. Using multimedia, WfWI hosted a film screening of The Greatest Silence: Rape in the Congo and an exhibition of photographs taken by participants of our program in the DRC.

Women for Women International's stand in the summit marketplace created an opportunity to engage one-on-one with supporters and conference attendees, including summit co-host Angelina Jolie, with whom Iliriana Gashi shared the plight of women in Kosovo, the need to bring perpetrators to justice and end the stigma that survivors face. Other supporters, including Mary and Stella McCartney and model Arizona Muse, visited to learn more and to show their support for women survivors of war.

A Step Forward to End One of the Greatest Injustices

While the summit was a critical opportunity to identify practical actions to prevent violence and hold perpetrators accountable, the need for global action continues. The summit was the latest step in a growing movement to address sexual violence in conflict and spur investments in programs and protocols that have a proven impact.

“Ending sexual violence in conflict and other forms of violence against women must begin with action to end gender inequality,” said WfWI-UK Policy Manager Carron Mann, highlighting the next steps moving forward from the summit. “WfWI is committed to engaging men and communities to challenge harmful and discriminatory attitudes that promote gender inequality and violence and create more peaceful communities that respect and protect the rights of all.”

#TimeToAct and Raise Your Voice to End Sexual Violence in Conflict

This summit was an important moment to stand with women survivors of war and conflict. Join us  and millions of others across the globe as we continue the momentum and raise our voices together to say the time to act to end sexual violence in conflict is now:

​- Use social media to add your voice and call for #TimeToAct and follow our tweets from the summit at @WomenforWomen.
- Share this blog on Facebook and Twitter to encourage others to raise their voices.

For US media inquiries, please contact Amber Khan at amber.khan@womenforwomen.org or (202) 521-9607.